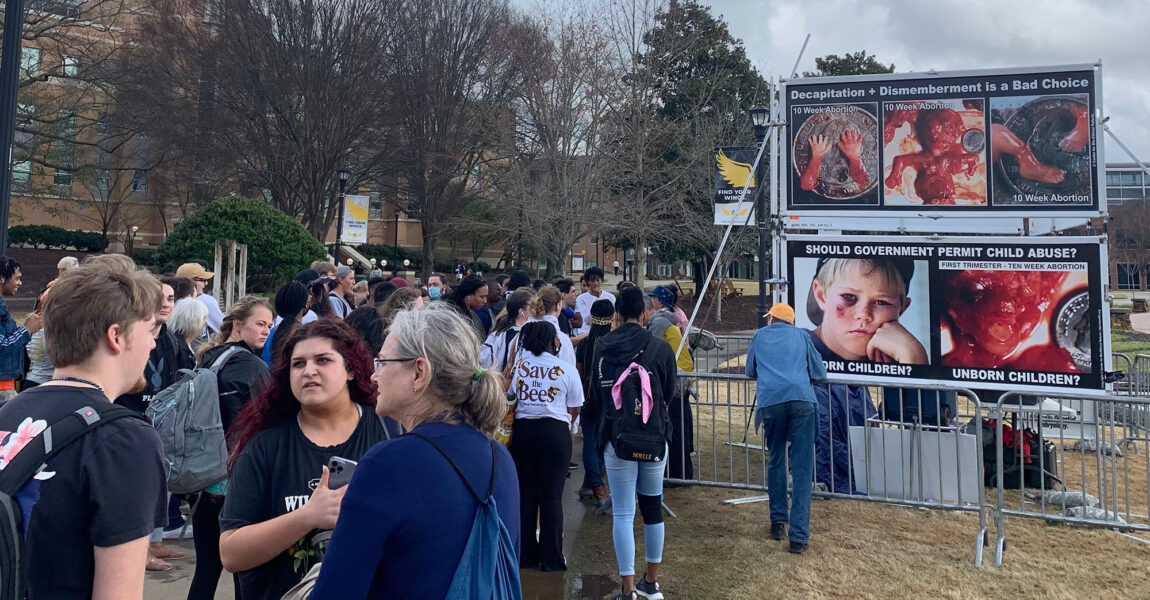 On Wednesday, pro-life activists disrupted the status quo of Kennesaw State University exposing hundreds of students to images of abortion victims. The activists were staff and volunteers for the Center for Bio-ethical Reform.

“We’re here with the Genocide Awareness project which is a graphic display depicting the victims of historically recognized genocide alongside the victims of abortion in our modern day. The whole point of that is to draw attention to the inhumanity of abortion and to draw attention to the humanity of the pre-born,” said Lincoln Brandenburg, spokesman for the organization.

At any point throughout the day a crowd of some fifty students surrounded the display having conversations with the pro-lifers and each other. The display met with a very mixed and emotionally-charged reception.

“This is not pro-life, this is forced, coerced birth,” yelled one young man above the crowd.

“Who here is a doctor? Where are the doctors saying this?” demanded a student of the activists. The response was lost in the cacophony of voices.

“As our founder Gregg Cunningham says, ‘one of the reasons the pictures of abortion is shocking, is because abortion itself is shocking’. I think as pro-life people we have to have a category that says that sometimes when people are upset… about a hard truth you are confronting them with, that’s actually a good sign that you are forcing their conscience to have to work,” said Brandenburg.

“You can’t say that because some people are angry about this that it’s not effective, because we get so many people who change their minds every time we do this, and so many people who are walking by and seeing… the controversy draws more attention to it, as it should. Those people in the middle they see this, they hear the responses and they hear the back and forth and ultimately they see the pictures too. So, it’s very effective.”

Charolette is a pro-life student who had seen abortion victim imagery before.

“I feel like people used to be affected by this [seeing the images] like 10 years ago, but now people are so desensitized it doesn’t even bother them,” she said.

Jackson a Christian, pro-life student said “I believe that the comparison [to genocide] can invoke a lot of emotion especially for people who are very emotional and think with their emotions as well and that’s why you hear a lot of people here at the college scream out their emotions. But I completely understand the premise, why you have these big posters here. It’s to get people to think first and foremost and to ask questions.”

The Center for Bio-ethical Reform attempts to replicate the techniques that were used successfully by social reformers throughout history for the abolition of slavery and the civil rights movement.

“By using the pictures we are basically moving the curtain, or as some might say we are opening the casket. I’m sure you are aware when Emmet Till was slaughtered due to racial violence in the 1950s his mother insisted on an open casket funeral because she wanted the world to see what they did to her baby. That sparked the beginning of the civil rights movement when people started to see that segregation and racism wasn’t just ‘separate but equal’, but that it was violence… It was something that you couldn’t mask with noble sounding euphemisms when people actually saw it for what it is. So that’s really the point of the display we use and the pictures we use.”

The group hopes to change the way in which Americans categorize abortion in their mind by getting people to think in terms of the genocides that society now recognizes are immoral.

“Every genocide has had some justification. Every genocide has had some way of dehumanizing the victims and essentially that is what we’re doing now with another human group and a people group because it fits in with our worldview which is ultimately rooted in Hedonism,” said Brandenburg. “Because we don’t have to actually confront the blood shed, it’s just easy for us to justify that as a society and as individuals.”

“I think it’s a very important issue to bring up,” said a student named Aden.

This question created a pause from the group that had previously been somewhat roudy. On the surface a question like this seems absurd, but upon further examination it is quite profound. He was hitting on the fundamental difference between his worldview and that of the pro-life Christians.

What gives human life value? What separates a person from an animal?

These questions can only be answered with the Bible. While the science of Biology teaches clearly that human life begins at fertilization. Ultimately, the controversy centers around a moral question whether or not it is ethical to kill human beings at that stage. Christians believe in the sanctity of human life because the Bible teaches it (Gen 1:26-27) and because our conscience bears witness to the law of God written on our hearts.

To say murder of born people is wrong, or to say anything is immoral requires that you “borrow” from a Christian worldview that holds to a belief in absolute truth and an objective standard of morality. Apart from a Christian understanding of ethics and the Christian view of origins (creation), we are indeed no different from an animal or a “worm crossing the road” and there is no objective moral standard.

The conversations sparked by the abortion controversy at schools often uncover deeper philosophical questions that force students to evaluate the source of their standard of ethics. That self-evaluation often opens up an excellent opportunity to present the Gospel. At least three students heard the Gospel on Wednesday as a result of this project. For students who are open, the volunteers share their faith and their personal experiences with abortion.

Bill Boyer, a volunteer said, “I paid for my girlfriend’s abortion at [age] twenty-nine. She aborted the only baby she ever carried. She went through depression counseling for five years and was never able to get pregnant again…

If we had to do over again we wouldn’t have had the abortion. I decided I needed to be doing something to help people like myself not make that decision.”